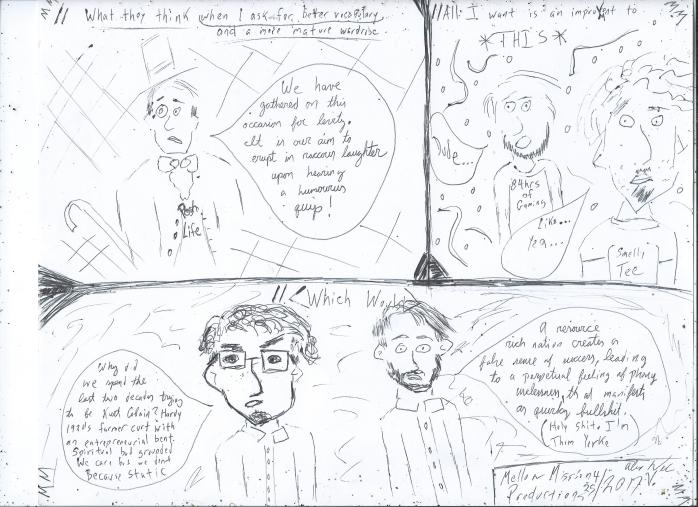 This little verbose atrocity seems to be what got the gears rolling for the ‘Post Grunge Punks’ idea. It was in an old sketchpad filled with stuff from various years. This was pretty recent though. March 2017, which is odd because normally things feel like they move too quick but this seems like it was forever ago.

Tile One – Narrator: What they think when I ask for better vocabulary and a more mature wardrobe…

Posh Life Guy:  “We have gathered on this occasion for levity. It is our aim to erupt in raccous laughter upon hearing a humorous quip.

Tile Two – Narrator: All I want is an improvement to THIS

Alan (Wearing a T-shirt that says Smelly Tee, because smelly T’s are the uniform of the early twenties douche.) “Like… yea….”

Tile Three: Narrator – Which would…

Alan: (Wearing a sensible button up and having discovered a razor) ” Why did we spend the last two decades trying to be Kurt Cobain? Hardy 1920’s farmer Cur with an entrepreneurial bent. Spiritual but grounded, we care but we don’t, because static…..”

So basically I’m just slapping people with social commentary, right in the face, with no regard for subtlety. O well.