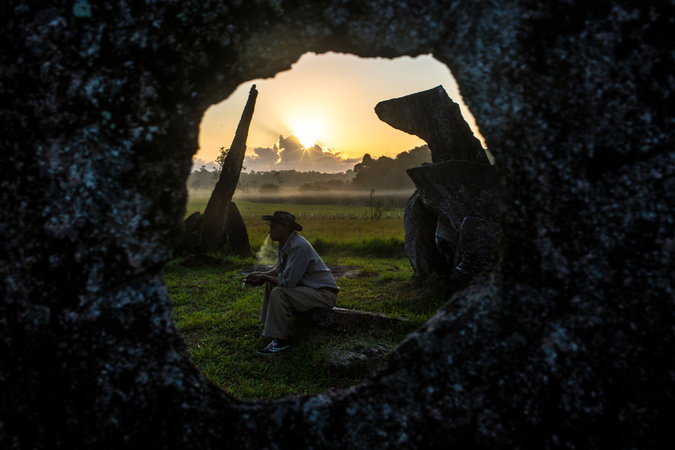 I looked around to see who was holding the remote. Nobody seemed to be.

I looked at the screen. It was a repeat of the ten o’clock news.

At the end of the broadcast for this particular township, there was a quirky little segment called: “News of the Weird.”

That’s what was playing now.

“Well, Alison,” the anchor said, “you know that maps can be deceiving?”

“Well, maps are just projections, they’re abstractions from reality suited for purposes like navigation, and often times affected by the place that map makers call home.”

“So, did you know that Brazil is actually pretty much the same size as the United States?”

“That’s right, and you can bet that such a big area, most of which is shrouded in thick rainforest holds many mysteries and surprises.”

“I don’t doubt it, Pete. So I guess you musta fished something wild from the info stream?”

The screen cut to an aerial video above some canopy, in the midst of which was a field, and in the field were some rocks. At the periphery, we could see the faint line of a river.

“You see Alison, yin, and yang, do happen, there is a little of the bad in the good and the good in the bad… deforestation in all its destructiveness may have just presented the best case for its cessation.”

“What we’re looking at here is the northeast of Brazil, in the state of Amapá, more specifically the municipality of Calçoene. Here, a farmer who was clearing land for grazing stumbled upon those rocks you see.”

“What’s so special about those rocks?”

“Well, they’re what’s known as megaliths, giant blocks of geology arranged by ancient man for mysterious purposes. This particular arrangement is very peculiar and along with other evidence is revolutionizing the way that we look at ancient cultures. It has been dubbed the Stonehenge of the Amazon since part of the formation seems to align with the sun during the winter solstice.”

“At 2.1 million square miles, The Amazon Rainforest, and its surroundings are sure to hold much wilder things. Perhaps this discovery will spur us to be more cautious with this irreplaceable natural wonder.”

“Let’s hope so! That’s all for tonight’s news of the weird.”

Image Source (and a great story)

Since the ‘post as you write’ way of doing things has certain options that ‘nonlive’ publications don’t, I’ll insert a reading suggestion for a really fantastic bit of long-form journalism: https://www.newyorker.com/magazine/2005/09/19/the-lost-city-of-z

That story will definitely factor into The Sketch of Sam Monroe as it unfolds.

Apologies to anyone who may have been annoyed by this break in continuity.

The link was important and meritorious enough to warrant the risk of being tacky.