The Sketch of Sam Monroe – Chapter 2.15 – Apollo and Dionysus 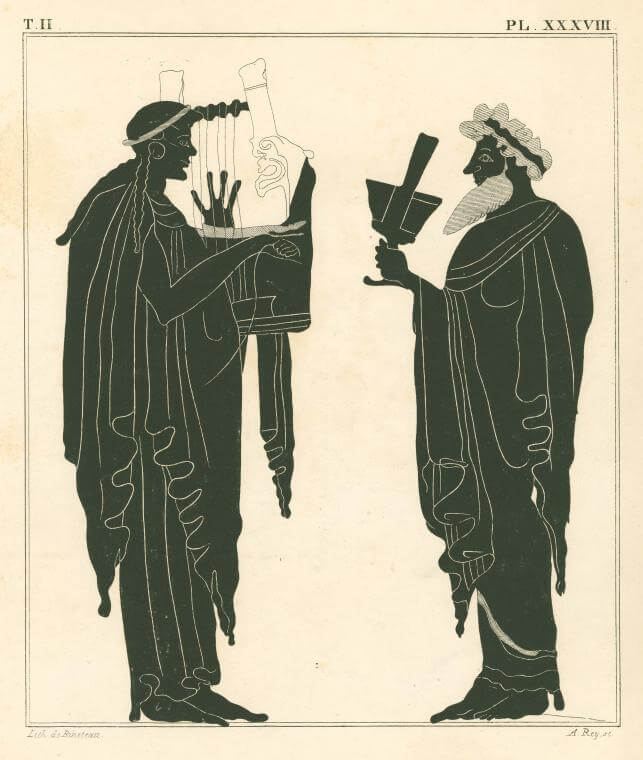 “In the ancient near east shaving, your beard was a sign of mourning.” Thornton’s reply was placid.

It took me a few moments to process the snark.

“Should we be mourning?”

“What have we lost?”

“The PLATO project has been terminated.”

“The Luckadoo Site is on lockdown.”

“Admitting unauthorized personnel without clearance, misappropriation of funds, breach of trust, and worst of all shenanigans.”

“Funny,” Schmidt interjected. “I thought that was the whole point of PLATO…shenanigans.”

“What?” I queried brusquely with undisguised annoyance.

“You don’t seem to take your job seriously.”

“The hell we don’t,” I said pointing to my ribs then looking at Hoyt, “He nearly lost his mind. Why…why would you even say that…? My exhaustion was getting the best of me, I seriously thought of strangling the man.

“Ok, so we take a liberal approach to achieving core objectives.”

“It’s not liberality, not creativity that I find troubling, it’s sterility.”

I was getting dangerously mad. But this time I managed to control myself.

“All the crimes here,” he said tapping a finger against a stack of documents in front of him, all could be forgotten, if there was a sufficient yield.”

“You weren’t satisfied with our reports?”

“The reports are lacking and as your injury demonstrates you are clearly incapable of even basic security.”

Thornton’s milky blue eyes were fixed on me in that placid appraising way, for what seemed like hours, but in reality must have been mere seconds.

“And how did that boy make it in?”

I was embarrassed. I couldn’t even answer.

“Aha…” Thornton grunted, “and did you bother to shut it?”

“So, you don’t even have the presence of mind to correct an obvious, easily mended mistake. If you were in my position would you entrust such people with a sensitive project?”

“Yes, but frequency and context matters.”

“Frequency! I just forgot to shut one of four fucking doors. One of four! Once!”

Thornton let me stew for a bit.

“Look, I know it’s easy to criticize as an outside observer. Especially as one after the fact, hindsight is 20/20, that sort of thing…however…I have to point out your trifecta of failure.”

“A trifecta is it!” I said flinging my water glass across the room. It hit the glass of the wall shattering into a million pieces. Fortunately, the wall itself was undamaged.

“Yes, yes, I’m sure it’s all sorts of frustrating but a trifecta it is. Three strikes. That’s why you’re out!”

“First, there is the matter of the officer and that boys snooping, second there is your incapacity to control your team and your fears leading you to breach protocol by seeking an outside physician, and third you can’t even shut the damned door.”

“Well fuck, I guess everything we’ve done is fucking worthless then, all the patents, all the strains, all the whitepapers! Two years of work! And you’re just gonna cut us off!”

Thornton sighed. “Temper, temper…that’s your problem..and let me ask you something….”

I raised my eyebrow in disdaining inquiry.

“What’s that in your jacket pocket?”

I pulled out my flask.

“Tsk, tsk, well it’s not the worst of things. But I can’t countenance this sort of debauchery with this sort of operaiton.”

“Ah fuck it whaterver,” I said taking a swig.

“Vicodin and alcohol are a dangerous mix.”

“Not quite, as I said this is…detention.”

“You know who was also quite the drinker and revler.”

I tried to recall my Greek mythology to no avail.

“He is the god of extasy and wine. Obviously right now you are under his sway. The pupose of the upcoming interim beside tying up odds and ends is for you to regain the favor of Apollo.”

Fabre and the doctor looked lost. But I understood why Thornton was talking all this mysticism. A large part of PLATO had to do with researching the psychological effects of archetypes. This babble was a good sign. It was a confirmation of Thornton’s ‘detention.’ We’d resume the project. My nerves simmered down a tad.

“That is why we’ve shaved you. For Apollo, the god of truth, appears a youth, and does not wear a beard.”

“K…” I said. Trying to hurry things along. I wanted out of this meeting room now that I knew we were safe. I wanted a nap.

“You boys are going to spend a fortnight in the Mojave.”

We all groaned collectively, knowing exactly what that meant.

He looked at the two burly aides at his side.

“Help these gentlemen finalize their NDA’s,” he said nodding at Fabre and Doc.