Look Out Boss! It’s the Bots! 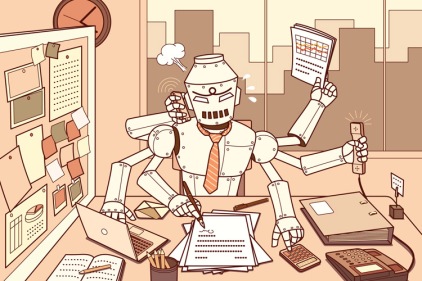 Busiest robot in the office with a heavy workload on all of his six hands.

“It’s also possible that this second wave of A.I.-based mechanization will automate the farmer’s job long before it removes the need for hired labor. In the indoor farms I visited, the brain work of farming-when to plant, irrigate, fertilize, and harvest-has been automated, but not the grunt work.”

This is something I’ve long suspected and have recently blogged about:

“I dunno how well versed these journalists and talking heads are in robotics but the level of sophistication required for a machine to load a UPS truck or do road work is insane. Fine motor function is a tricky business.” (Everyone should Code?)

While I hate to play Freud I think this all has to do with libido. The folks proposing a labor apocalypse delivered on the chrome horse of automation might know a bit of Java. They’re ‘men of letters’, socially savvy (read manipulative), and pathologically concerned about abstract futures.

It’s sexy to worry about the peasants not being able to keep up with your ability to write a Vox article.

But perhaps the effete should be worried about themselves.

Not about being accidentally racist, or sexist, or spilling their lattes on the latest issue of Entrepreneur.

They should be worried about their jobs.

Honestly, it should have been obvious from the start. Which tasks lend themselves to mechanization?

“The repetitive ones that those sweaty truckers and stockers do! You know the kinds done by people who make boner jokes. O shit is that the HR lady…I was using boner to describe how the lower classes talk…”

No, my precious orchid.

The sorts of jobs that lend themselves to automation are computational. They’re things with decision trees that don’t require the trees to sprout hands. In a nutshell: brain work.

Stuff that requires the fast and accurate scanning of vast reams of data, the analysis of that data, and a decision. Sure, QuickBooks hasn’t made accountants obsolete. It has however necessitated a bit of scurrying:

“Technology is rapidly reshaping the accounting industry, making certain skills and knowledge obsolete but at the same time creating opportunities for accountants to offer new services in the marketplace. For future accounting leaders, perhaps the biggest determinant of success is staying ahead of the technology curve so new innovations enhance one’s business, not replace it.” (https://quickbooks.intuit.com/ca/resources/pro-taxes/new-skill-sets-future-accounting-leaders/)

This suggests that it’s not truckers that will be thinner on the ground but research assistants, HR people, and stockbrokers.

Basically people who have to repetitively dig through data and perform basic logic. Things that a robot (computer) can do much better faster and cheaper than it can pick a strawberry.

This article isn’t here to gloat about folks losing their jobs. It’s here to point out that we need to think more deeply about what we value as a society. About what brings purpose to people’s lives.

Why haven’t we seen Glenn Gould in decades?

All the while engaging in self-congratulatory pity for the class of people who can actually change the oil.

Automation is inevitable. Let’s not let class pretensions blind us to where it’s most likely to happen. Now that we are getting a grasp on how to feed, clothe, sanitize, and house our teeming billions maybe we can start getting pre-industrial.

No, I don’t mean going Amish. I mean a return to craftsman culture. The sort of attention to detail, originality, and quality that flourished in Benjamin Franklin’s day. The sorts of activities that enrich lives and communities while being fulfilling in a specifically human way.

This isn’t writing code, or optimizing SEO, it’s the manipulation of matter. Manipulation – manus – doing it by hand. Hands honed by experience and guided by well-trained human minds and well trained human hearts.

The future is ‘The Goldberg Variations.’