One More and One Less 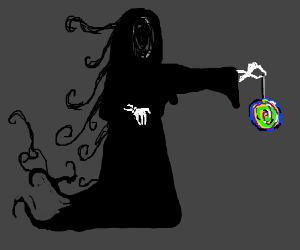 In any case the TL; DR version of this is every time you sit down to write or learn; you’re not only doing it one more time but also one less. Cause the Grim Reaper is standing right there, playing Yo-Yo, and sometimes he gets real impatient and chokes you with the string.

Recently. Just today in fact. I’ve had to process mortality.

I’m not really emotional about anything. I honestly feel rather clinical. So clinical as to be a bit perturbed. Which is why I mentioned to a friend that some people may find my nonreactivness to be cold and off putting. Or maybe the fact that I don’t really grieve long enough. Whatever long enough is.

I guess what I imagine bothers people is I take death in stride. A fact I attribute to having lost my father at five years of age. I guess I’m bothered by it too since I feel that I should feel something. I do sometimes. But not enough apparently. Maybe.

Anyhow, that’s not what the story is about but rather a framing device or maybe somewhat more precisely – something that helps me take disparate thoughts and tie them up with a bow thus rendering it intelligible as a gift.

Currently, I’m studying the Web Stack (JS, PHP included) as well as Java it’s something I’m doing in a roundabout way. Very roundabout. I started poking at Java in 2008.

My dog has cancer. He didn’t show any behavioral signs at all. At least none that would suggest a grapefruit sized tumor. He did have some weird-looking growths that I didn’t really take note of because they were round his nethers. I thought they were just a skin irritation. And due to the location and my schedule I’d often forget about them.  Until they started to bleed. It’s not necessarily unsalvagable but it’s not especially promising since Brownie is old.

So as I’m sitting here looking at arrays, pointers, objects, etc I’m thinking what if I have cancer? How long have I been putzing around with these basic bitch concepts. And why?

Well, if I do have or get cancer or get hit my a car, or assaulted by a gang of enraged hipsters for dissing Ruby…meh so what…whatver will be will be…serah serah…etc.

As to why? Cause it’s fun and I’m doing it primarily to sharpen my attention and logic faculties and most career aspirations are somewhat on the back-burner. Except using my skills to make TFJ less shit.

In any case the TL; DR version of this is every time you sit down to write or learn you’re not only doing one more time but also one less. Cause the grim reapers standing right there playing Yo-Yo and sometimes he gets real impatient and chokes you with the string.

So pet it while it’s alive and code it before the arthritis sets in.